The Top New Franchises Interview series is designed to give prospective franchisees info and insight into some of the freshest new franchises to emerge in recent months and years… and give new franchisors an effective way to get their stories told across the Internet.

Meet Trash Talkin’ College Hunk Nick Friedman The College Hunks Hauling Junk franchise is a breath of fresh air in the trash collection industry. If you’ve got $100K, Nick and Omar can make your lifelong dream of being a refuse relocation engineer a reality.

Meet Chyten Educational Franchising’s Neil Chyten What happens when a respected and highly effective regional tutoring program joins forces with one of franchising’s largest growth networks? Learn for yourself

Do you know of a promising new franchise program launched within the last 5 years? If you would like to request an interview, or nominate a franchise professional to be interviewed, email Sean at info[at]franbest.com.

Looks like a brand new franchise.  The demand for Mediterranean cuisine is good and an uncrowded market niche.

Enthusiastic reception of the Amazing Kabob House’s exceptional Mediterranean cuisine has propelled the successful brother and sister team of Kochai and Omar Farhad to a decision to franchise their popular restaurant. Originally established to offer traditional Mediterranean food to the mainstream American market, this team rapidly discovered the wide-appeal of a healthy Afghan-influenced menu.

What began as a healthy alternative to fast food in the city of Orange in March 2003, and opened in Brea, CA in November 2005, has quickly become the popular place to enjoy this delicious selection of Afghan/Persian-influenced Mediterranean fare. Patrons travel from Riverside, Los Angeles, and San Bernardino counties, as well as the local area, to enjoy this cuisine, which is offered at a very reasonable price.

Besides being delicious, Amazing Kabob entrees cater to the growing trend of smart dining. With the increasing demand for nutritious, delicious, and calorie conscious food, along with the growing awareness of the health-value of a Mediterranean diet, dining out can be now be healthy without sacrificing taste. With no added cheese or sugar, tasty menu items are satisfying for everyone – vegetarians and meat lovers alike! Low-carb choices are available, as well.

Appetizers are just the starting point of each feast, with fresh-baked naan (bread cooked in a clay oven) served with garlic, hummas, sarma, or baba ghannouj, kabobs (filet mignon, chicken, ground beef, seafood, and vegetable) and sandwiches served as wraps and stuffed pitas; soup and salads – all offered in lunch or dinner-sized portions – are guaranteed to satisfy the largest appetite. Child portions are also available. Best of all, the prices are very reasonable. 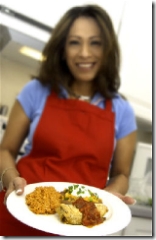 Have you ever hear of Super Suppers, Dream Dinners, or Dinner’s Ready?

What about My Girlfriend’s Kitchen, Supper Thyme USA, or Pass your Plate?

They’re called Meal Prep or Meal Assembly franchises, and here’s how they work.

According to the Wall Street Journal :

The meal-preparation business combines old-fashioned cooking with contemporary socializing. Groups of customers gather at workstations where they measure precut meats, fish and vegetables into freezer containers according to the company’s recipes posted nearby… Apron-clad workers answer the questions from cooks like ‘What can I use instead of soy sauce?’ and wipe down counters and wash dishes.

The Buffalo Biz Journal explains that busy professionals can assemble gourmet meals in bulk  and bring them home in pans to be frozen until meal time:

…their premise is the same: Customers sign up for a session and order their meals online; come in and prepare them; and take the meals home in freezer-friendly containers. Workers clean up when the customers are finished.

It’s a new idea that hundreds of entrepreneurs and franchisees are betting their savings will be the next big thing.  The WSJ article estimated that there’d be more than 1,100 meal-preparation kitchens in the U.S. by the end of 2006, doing about $270 million in sales.

About 40% of those stores are independent businesses, while the rest are franchised.  Meal Prep franchisors generally charge a franchise fee of about $35,000, plus a royalty of 4% to 6% of gross sales and a 1% or 2% ad fee. The total cost of opening a meal preparation franchise ranges from $120,000 to $300,000, depending on size and location.

Here are some of the largest of the meal assembly franchise chains, according to the Easy Meal Prep Association:

(FranBest.com) Founded in 2003, Cereality is a new concept in the QSR space, specializing in creating a unique and entertaining experience around the American ritual of eating cereal. Customers choose a base from Cerealityâ€™s menu of more than 30 cereal varieties and signature cereal blends, and select from 40 toppings and mix-in combinations to create their ultimate bowl topped with their favorite assorted milk and hot and cold beverage. The offerings extend to parfaits, smoothies, cereal bars and other bakery items. The Cereality customer experience is enhanced by a home kitchen atmosphere and the preparation of orders by pajama-clad Cereologistsâ„¢.

â€œWhen we formed Kahalaâ€¢Cold Stone, we promised to aggressively seek out acquisitions of leading brands in the QSR space to grow the portfolio of franchise brands for partners, and this is the first of many to come,â€ said Kevin Blackwell, chairman and chief strategist of Kahalaâ€¢Cold Stone. â€œCereality is one of the most exciting, distinctive concepts to be launched in the past decade, attracting a great deal of interest from franchisees and cereal-craving customers alike.â€

Cereality has seven cafÃ©s in operation, with an eighth location scheduled to open at JFK International Airport later this month. Cereality currently holds franchise commitments for the opening of an additional 24 cafÃ©s over the next six years. Prior to 2007, Cereality had wholly owned and operated all of its cafÃ©s. There are now two franchise locations open and the company has received more than 7,000 inquiries to date from entrepreneurs interested in opening Cerealities across the country.

â€œWe believe Kahalaâ€¢Cold Stone is well-placed to scale the Cereality concept and create new opportunities for our more than 3,000 franchisees who are very taken with the concept and eager to explore multi-branding within our portfolio,â€ said Doug Ducey, CEO of Kahalaâ€¢Cold Stone. â€œWe plan to grow the Cereality brand by doing what we do best â€“ providing exciting opportunities for entrepreneurs, successful concepts for our franchisees and innovative, fun experiences for our loyal customers.â€

Cereality co-founders David Roth and Rick Bacher commented, â€œKahalaâ€¢Cold Stone is a franchising powerhouse and we believe Cereality will realize its full potential by leveraging its operational and brand-building expertise. Shared between us is a sharp focus on creating a unique customer experience and we very much look forward to opportunities to come as we ramp up our visibility in the marketplace.

â€œAs entrepreneurs ourselves, we fully appreciate the value Kahalaâ€¢Cold Stone is delivering to fellow entrepreneurs.â€

Cereality marks the first acquisition by the recently formed Kahalaâ€¢Cold Stone, the next wave in brand building with the vision, experience and track record for delivering to market new and robust franchise opportunities to entrepreneurs worldwide. As announced on May 10, 2007 Kahalaâ€¢Cold Stone was formed through the combination of Kahala Corp., a leading franchiser, developer, and marketer of QSR and the Cold Stone CreameryÂ®, the fastest-growing ice cream concept in the United States.

Cereality is the first restaurant business to ever break the mold of traditional foodservice to bring a unique, highly personal, healthy eating experience to the consumer, entirely focused around brand-name cereals. Customers can choose from more than 30 different cereal varieties, over 40 different toppings, a variety of milks (including soy and lactose-free) and choices of hot and cold beverages. The unique residential, home kitchen atmosphere is punctuated by familiar brand-name cereal boxes displayed in custom-built kitchen cabinets and pajama-clad Cereologistsâ„¢ prepare orders to customersâ€™ specifications. For photos and more information please visit www.cereality.com.