The newest franchisees of Baker Bros have secured the exclusive rights to develop a minimum of 5 Baker Bros restaurants in the Quad Cities and Cedar Rapids & Dubuque, Iowa over the next 4 years.

This is the second Area Development Agreement in the Midwest that Baker Bros has signed.  A different Area Developer is also actively searching for 3 locations in Indianapolis, Indiana.  Current Baker Bros franchisees include multi-unit retailers and current or former multi-unit operators of McDonald’s, Popeye’s and Texas Roadhouse.

Not to be confused with typical sandwich chains, Baker Bros American Deli (www.bakerbrosdeli.com) is an upscale, fast-casual deli featuring Specialty Sandwiches, Specialty Salads, Gourmet Pizzas and more.  All entrees are prepared fresh to order using the freshest available breads, ingredients and produce. The restaurants typically operate in high visibility strip centers and occupy 2500-3500 SF with seating for 120-160.
WHAT DO YOU THINK? SHARE A COMMENT BELOW.

(FranBest.com)  Looking for a franchise opportunity that’s "out of this world"?  Then Space Aliens Grill & Bar may be the franchise for you.

However, if that corny "out of this world" double entendre made you flinch, turn back now.  There are dangerous puns ahead, Will Robinson.

According to the Space Alien Grill & Bar restaurant website:

There is intelligent life down here and they know where to eat, and that’s because Space Aliens® Grill & Bar channels in children and adults alike with its alien-induced aura and out-of-this-world food.

Each of our restaurants has been created to beam up the imaginations of the earthlings that walk into our world. The décor features a 30-foot-high domed ceiling that displays a view of outer space. Plus, we have a force field of alien sculptures in the dining room, bar and arcade, showcasing a variety of extraterrestrial settings and distinct personalities.

And the food… earthly explorers can enjoy a menu ranging from Martian Munchies™ to Alien Burgers™. It’s enough food to fuel them up for their next endeavor.

Then Intergalactic Alien population (pictured right) is a virtually untapped market.  According to Space Aliens Bar & Grill franchise section, the six unit chain (with franchise locations in MN and ND) is a great franchise opportunity as well:

Are You Ready To Start An Out-Of-This-World Franchise?
Now is the perfect time to franchise with Space Aliens® Grill & Bar. With a unique atmosphere, tasty food and galactic fun, no other restaurant 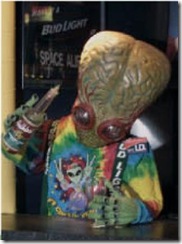 franchise offers this kind of flexibility in the market. The outer space concept is fresh and appeals to all age demographics, and research has shown that demand is high for this unique style of dining entertainment.

Through extensive experience, growth and success, we’ve learned that each franchise will be a critical element and vital asset in the development and growth of Space Aliens® Grill & Bar. We guarantee that franchise entrepreneurs whom we select will be expertly prepared to open and operate in their chosen location. As the franchisor, we will be totally dedicated to helping you succeed as a franchise.

The philosophy behind these three Bismarck men is simple. Mort, Gene and Dave believe in serving quality food and beverages at a fair price with attentive service in a clean, fun environment. Through their vision, development and leadership of Space Aliens® Grill & Bar, their restaurant flourishes and is poised for significant growth. Are you ready to become part of that growth?

One word of warning regarding illegal alien activity:  While the franchise section of their website boasts about their advertising agency and marketing materials, the agency (and company) doesn’t seem to be familiar with franchise laws regarding earnings claims.  Their materials include prohibited sales figures, constituting an earnings claim.

Franchise of the Day: Mandler’s The Original Sausage

In a fast food landscape dominated by hamburgers, pizza, chicken and subs, there is a new meal option charging over the horizon. Carrying a European flag, this culinary cavalry is armed with exotic mustards, delectable toppings and cylindrical delicacies on fresh baked rolls and is led by royalty in the person of Ronnie Mandler “The Sausage King.

One of the fringe benefits of Ronnie Mandler’™s travels to Europe as an executive in the garment industry was the pleasure of sampling different types of sausages. In many European cities and neighborhoods sausage is the fast food. Noting that it was impossible to indulge his growing appreciation for this greatly enhanced version of the humble hot

dog, Ronnie developed a plan to offer the tasty tubular treats to the U.S.

Fast forward seven years later and Ronnie sensed that the time was right to implement his finely detailed plan. He found a terrific location near Union Square in New York City and opened Mandler’s “The Original Sausage Company. The restaurant was a huge hit with both the public and the press, receiving glowing reviews from Zagat™s, the New York Times, the Daily News and New York magazine, to name just a few.

Mandler’s offers eleven flavors of European-style sausage, each a generous 91/2 inches long, including bratwurst, krainerwurst, chorizo, Italian and andouille, a Cajun-style favorite. Each sausage was specially developed according to Ronnie Mandler’s specifications and is served on a fresh-baked roll. The same hands-on approach is applied to the preparation of the intriguing flavors of the various mustards presented at the Mustard Bar. Customers can top their sandwiches with smoky garlic Dijon or amber ale honey mustard and others. Toppings include peppadew, a South African pepper relish, sauerkraut, beef chili and sweet and sour red cabbage to name just a few. Zucchini fries and corn fritters are just two of the options for side-dishes.

Americans crave options in the fast-food/quick casual sector and their collective palate is open to new and interesting ethnic food selections. The European-style sausage approach pioneered by Mandler’s offers the entrepreneurial-minded one of the only truly unique restaurant franchises available today. The concept creates the elusive â€œbuzzâ€ that attracts attention, trial and word-of-mouth. The operation is streamlined for efficiency and cost control and franchisees can expect first-class training and exceptional support.

Ronnie Mandler is an entrepreneur himself and appreciates the desire, dedication and hard work to bring a new concept to market. With his passion for the products he has developed and the potential for dramatic growth, this Sausage King is ready to provide qualified franchisees with the systems and guidance to introduce this meaty new concept to their local markets.

Missoulian.com featured a story on the HuHot franchise concept which is on the franchise fast track.  Here are some choice bits from the story, which you can read here.

HuHot one of the fastest growing small chains in the nation

By TYLER CHRISTENSEN of the Missoulian

HuHot Mongolian Grill is living up to its Genghis Khan-inspired concept.

The Montana-based restaurant chain is expanding rapidly, and, in fact, is now the second-fastest-growing small chain in the nation, according to Restaurant Business magazine. The magazine contracted with Technomic, a food industry research and consulting firm in Chicago, to produce a list of the 50 fastest-growing restaurant franchises with total sales between $25 million and $50 million.

HuHot, which has corporate offices in Missoula, was the only company from Montana to make the list. Clocking systemwide sales of $27.5 million and average per-store sales of $1.7 million, it was outpaced only by Salsarita’s Fresh Cantina of Charlotte, N.C.

HuHot began franchising just five years ago, and has already exploded into 24 locations in 13 states, including a new restaurant that opened in Kalispell last month. Three more locations are currently under construction, says Andy Vap, who founded HuHot and now runs it with a number of other family members.

The first HuHot restaurant in Missoula was launched in 1999 under the name Mongo’s Mongolian Grill. A few years later, when Vap began considering franchising, he researched trademarks and discovered the name was already registered in other states. So he did some more research and eventually settled on HuHot, the ancient capital of Inner Mongolia.

The Mongolian grill concept has been around for a long time, Vap said, but it has typically been offered as a side attraction. Vap and his family thought it could stand on its own.

The idea is to let patrons choose from a buffet-style array of ingredients and sauces, then hand their dishes over to a chef to cook up as they watch.

Vap’s new restaurant chain is still a family-run affair. Andy’s sister, Molly Vap, is the director of franchise development, he pointed out.

â€œMy aunt and uncle work with us, my mom and dad are still involved,â€ he added.

Growing up in the business gave Andy Vap a good sense of what it takes to make it in the food and beverage industry, as well as valuable experience with franchising.

â€œIt’s a crazy industry,â€ he said. â€œYou have to put everything up front and open a store and then hold your breath. In the restaurant industry you can’t ever avoid competition – all you can do is pick a niche. The hard part is opening that first store, proving that the concept works.â€

â€œIt’s got its positives and negatives,â€ he said via telephone from the magazine’s headquarters in New York. â€œThe positives, of course, is that you’ve got a larger pool of people helping you grow, you’ve got a flush of cash when franchises come on board. But you’ve got to be very smart about it.â€

After all, many chains have tried to franchise and failed. Most of them either expanded too quickly or didn’t do enough vetting of franchisees, Smith said. Franchisers need to make sure they’re signing on the right people, he said.

It’s also important, he said, to make sure franchises stick to the original concept. It’s tempting for franchisees to want to bring in their own ideas, but that’s dangerous for a growing chain.

…things are going smoothly for the folks at HuHot, he said, and they continue to field a lot of franchising offers despite the fact they do almost no advertising for them.

What seems to sell the idea, he said, is walking into one of the restaurants and soaking up the atmosphere – and seeing it packed full with customers.

â€œEvery year,â€ Vap said, â€œhas just been a busier year than the last.â€

According to a company press release, The Greene Turtle Franchising Corporation announced that JPB Capital Partners has acquired a majority ownership interest in the company through an investment that will support the company’s continued growth and expansion. The Greene Turtle Franchising Corporation, based in Edgewater, MD, is an owner and franchisor of sports-oriented restaurants in the Mid-Atlantic region. Currently, fourteen Greene Turtle locations are in operation and agreements are in place to open an additional fifteen.

Mike Sanford will continue in his role as President and CEO of The Greene Turtle Franchising Corporation and will lead the execution of the company’s strategic growth plan, including the addition of both company-owned and franchised restaurants. The company recently opened a location in the Verizon Center complex, home to the Washington Wizards and Capitals, in Washington, DC, and two new locations at BWI Airport and Lewes, DE will open in the coming months.