ROSEVILLE, Calif. – (Business Wire) Yes! Solar, Inc., a wholly owned subsidiary of Solar Power, Inc. (OTCBB:SOPW), announced today that it has executed franchise agreements for two additional territories within the states of Colorado and Montana. The newest territories in the Yes! Solar SolutionsTM retail network of are located within Pueblo, Colorado and Bozeman, Montana. The two territories extend national coverage of the growing retail solar franchise network and will introduce the Company’s unique solar energy offerings to approximately 95,000 homeowners as well as the many small businesses within these territories.

The Bozeman, Montana franchise will be operated by owners John and Theresa Huyser, long-time residents of the area. Theresa will manage sales and marketing, while John will focus on managing day-to-day operations. “We look forward to providing our friends, families and the community where we live with a clean, reliable and cost-effective alternative to utility-sourced electricity,” said Ms. Huyser. “The Yes! Solar Solutions franchise business model is a perfect fit for us and our environmentally minded community members.” The Bozeman franchise territory harbors approximately 50,000 owner occupied dwellings and numerous businesses throughout its territory where many residents are engaged in leading green lifestyles.

The Yes! Solar Solutions Pueblo, Colorado territory will be operated by Harvestech, LLC, which is owned by Jared Johnson and Robert Harford. Mr. Johnson is President of Harvestech, LLC and will serve as General Manager of the Yes! operation. Mr. Harford will manage sales efforts. “We will be serving an area that harbors approximately 45,000 owner-occupied homes in a state that offers very generous incentive programs to mitigate rising electricity costs,” said Mr. Johnson. “This Yes! Solar Solutions franchise provides us with a true win-win offering. We are providing the resident of the communities we will be serving with a means to become energy independent while they realize cost benefits and help the environment,” Mr. Johnson concluded.

Both of these Yes! Solar Solutions franchisees are scheduled to begin operations in June, 2009.

In related Yes! franchise developments, Yes! Solar Solutions of the Triangle, North Carolina held its grand opening on May 2 to a warm reception by the local community. The newest energy outlet in the Yes! Solar Solutions franchise network received a great turnout of visitors to their energy outlet’s celebration. “We have a terrific location in the heart of Cary and we couldn’t be more pleased with the way our grand opening went,” said Kathy Miller, one of the partners of the Cary, North Carolina Yes! energy outlet. “Our store looks beautiful and is doing a wonderful job showcasing the many benefits a Yes! home energy system delivers.”

“These two recent additions and the opening of our Cary, North Carolina extend our national reach and add to the experienced group of business professionals operating our energy outlets,” said Jeff Pontius, Executive Vice President for Yes! Solar, Inc. “We look forward to serving the home and business owners within our expanding reach with our solar energy system solutions and a growing number of solar product innovations.” Yes! Solar, Inc. is actively seeking franchisees across the nation to serve a growing interest in and demand for residential and commercial solar energy solutions.

These are tough times for independent real estate agents.

In fact, real estate agents are getting pressure from every direction. MLS property listings, which were once under the exclusive control of real estate agents, are now widely available to a new breed of discount brokers and a variety of online resellers. Shrinking commissions, a huge crop of new agents and a down housing market have made it increasingly tough even for many seasoned real estate professionals.

The National Realty Group franchise is offering the independent real estate professional a new way to compete. By joining the National Realty Group franchise system, real estate professionals will receive the systems, training and support to benefit from two new potential revenue centers: providing their own mortgage and (in some states) escrow services.

Traditionally, an agent would help a couple find their dream house and then hand them off to mortgage and escrow service providers for financing. With the NRG program, the franchisee would provide the real estate services, then also provide the mortgage and, when applicable, escro services. According to National Realty Group franchise founder Jeff Maas, it’s a win-win situation for all involved: Home buyers get the convenience of a one-stop real estate resource, and the franchise owner and agent has two, sometimes three, potential revenue centers instead of one.

The National Realty Group franchise may also help even out the peaks and valleys so common in the real estate market. According to Maas, when the real estate sales side is down, the mortgage side often gets busier with mortgage refinancing.

At this time, the National Realty Group franchise is only being offered to real estate professionals in California and surrounding states. For more information about this and other top new franchise opportunities, visit the Top New Franchises blog at TopNewFranchises.Com.

(Franchise Opportunities)  Do you dream of owning a business that’s, literally, flush with cash?

Well, your window of opportunity may be equipped with a small exhaust fan… with the ElizaJ portable toilet franchise.

The ElizaJ isn’t your run-of-the-mill portable toilet rental franchise.  Do you have what it takes to join the elite ElizaJ franchise family?

As an ElizaJ Franchisee you will do business in two growing, lucrative    markets — You will be an Event Supplier in general

and a Supplier for Outdoor Portable Restrooms specifically, both fast-growing markets.
• The Portable Sanitation Association International
estimates the portable sanitation industry at $1.5 billion.
• No market leader- as yet- in the outdoor portable restroom
market.
• An estimated 1,500,000 portable restrooms are in use today.
• There are over 2.4 million weddings in the US annually
accounting for a $80 billion industry.
*The ElizaJ portable restrooms are in demand not only for weddings but also    for corporate events, family reunions, graduations, sports events, municipal    properties and others, all adding up to another billion dollar market. 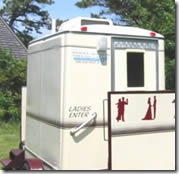 Is the ElizaJ franchise in your future?
It could be if the following describes you…
• Ambitious
• Highly motivated to succeed
• Skilled in sales and marketing
• Looking for a prime territory opportunity in a lucrative service industry
*Most of our Franchisees will function as managers of the business and play a vital part in generating new business. Some Franchisees may also take on operational duties…It’s your choice. 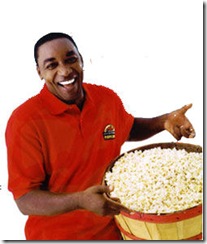 (FranchisePick.Com)  Isiah Thomas has had a lifelong love affair with popcorn.  It started as a boy, growing up in the housing projects of Chicago’s poorest neighborhoods.  Isiah’s mother used to impart her strict life lessons to her sons around a big bowl of popcorn – sometimes sourced from the discarded bags of popcorn behind the Chicago stadium.

Isiah is now an investor in and partial namesake of the gourmet Dale & Thomas Popcorn, the NY-based gourmet popcorn franchise company that it will commence its franchise program in 2008.

Here’s the franchise game plan, according to a release from Dale & Thomas’ PR firm:

ENGLEWOOD, N.J., Feb. 25 — Dale and Thomas Popcorn announced today that it is launching a new and innovative franchise program in select areas of the Northeast. This move signals a new phase of expansion for Dale and Thomas to further share its chef crafted, gourmet popcorn with its friends and loyal customers throughout the country. Through its network of company owned and operated popcorn centers, and after testing multiple formats, Dale and Thomas has quickly built the country’s leading brand of gourmet popcorn. Led by industry veterans from both the food and retail industry, and backed by well known investment firms Goldman Sachs and Sun Capital Partners, Dale and Thomas has developed a formula for easily duplicating the experience while maintaining the highest quality popcorn and commitment to customer service.

To facilitate the expansion of Dale and Thomas centers, the company has secured a relationship with Northboro Builders Inc., to design and build these new Dale and Thomas Popcorn centers. Northboro’s stellar reputation and experience in the franchise industry, along with its history of delivering excellence and simplicity in “turnkey” design and building services, ensures the success of look and feel of each Dale and Thomas location.

“We are enthusiastic and eager to launch our new franchise program,” says Terry Pritikin, Chief Retail Officer, of Dale and Thomas Popcorn. “Since opening our Times Square location three years ago, we’ve learned a great deal about our stores, our products, and our customers, not only through evaluating the service and merchandise in Dale and Thomas company owned stores, but through our relationship with our two existing franchise locations. We have taken the best from our research and have created an exciting new paradigm of franchising, with our ready-to-pop Franchise program.”

Dale and Thomas will be taking franchise applications immediately and has planned rollouts of the new centers beginning in mid 2008.

About Dale and Thomas

Dale and Thomas is a privately held company, which manufactures America’s first line of chef crafted, gourmet popcorn products. The Englewood, New Jersey based snack food company sells through wholesale, retail, and direct channels. Dale and Thomas also has a wholesale line: Popcorn, Indiana(TM), a premium kettle corn line, sold at supermarkets, club stores and gourmet boutiques throughout the country. The company has also achieved a high level of recognition as it was selected by Oprah Magazine as one of her favorite things. The company’s Chef Ed has appeared on the Today Show and The View, as well as other national television appearances. The company has also been featured on the CBS Early Show and the Big Idea with Donny Deutsch on CNBC. Currently there are eight Dale and Thomas company retail stores and two franchise locations, located in New York City, New Jersey, Pennsylvania, South Florida, Michigan, and Massachusetts. Dale and Thomas Popcorn is also available at www.daleandthomas.com and 1800-POPCORN.

WHAT DO YOU THINK OF ISIAH THOMAS’ POPCORN FRANCHISE?  LEAVE A COMMENT BELOW.

College Hunks Hauling Junk is an exciting franchise opportunity that leverages award-winning marketing strategies to provide a low-cost, customer-focused junk removal service. While their brand identity and tongue-in-cheek name has a whimsical quality, they’re serious about meeting the needs of the rapidly growing and highly segmented junk-removal market.