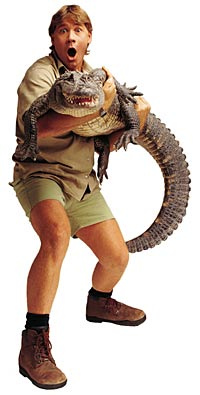 I admit it. The first time I saw the goofy, over-the-top tv crocodile wrestler (Crocs RULE!) Steve Irwin I thought his major contribution to the world would be providing easy fodder for parody. He seemed like a cartoon version of Crocodile Dundee, who was already a cartoon version of something. 13 years later I find myself seriously mourning the death of a master showman and marketer who seems to me, now, strangely important.

Steve Irwin, the Australian known to millions of fans worldwide as â€œThe Crocodile Hunter,â€ died at age 44 after being stung by a stingray while filming off the Great Barrier Reef. His accomplishments were impressive, both on and off the screen. He turned his parentsâ€™ provincial reptile park into an international tourist attraction with an annual income exceeding $4 million. Irwin’s TV shows, all produced by his own production company, became pivotal to the success of cable TV broadcaster The Discovery Channel in the US and later its offshoot, Animal Planet. His low budget 2002 movie Crocodile Hunter: Collision Course grossed more than $35 million at the box office. When he died, Australian Prime Minister offered him a state funeral, saying his death was “â€¦a huge loss to Australia. He was a wonderful character. He was a passionate environmentalist. He brought joy and entertainment and excitement to millions of people.”

What were the magic ingredients Steve Irwin had that made him internationally known and lovedâ€¦ and how can you apply some of that magic to your business? Three things come to mind immediately.

The first is enthusiasm. Boundless enthusiasm. Loud and obnoxious enthusiasm. He exuded it. He screamed it. He blabbed his message at the top of his lungs to whomever he could get to listen. If you were surfing by his channel, thereâ€™s no way you werenâ€™t going to know he was out catching Crocs at that very moment! Big ferocious Crocs! Crocs so big and wild they could break you in half! Crikey! Crocs RULE! I found myself watching his show for no other reason than that he demanded it. His enthusiasm and showmanship demanded â€“ and got â€“ your attention.

The second secret ingredient was true passion. Once you watched for a little bit, you realized that this guy was no actor faking sensational stunts. He may have been faking sensational stunts for entertainment value, but behind the Crocodile Hunterâ€™s corny Gâ€™day Mate veneer was a committed environmentalist whose love for big, dangerous, misunderstood reptiles, wildlife in general and whose dedication to teaching the world about them was as genuine as it gets. Here was a guy so passionate about what he does that people couldnâ€™t help but listen.

Steve Irwin wasnâ€™t the son of a millionaire. He didnâ€™t have a Harvard MBA, Hollywood connections or political influence. But he provided something that the American public is starving for: Enthusiasm. Passion. A living example of somebody who gives a damn about something.